“Can we fix it? Yes we can!”
―Bob the Builder Catchphrase

The Original Series of Bob the Builder ran between 1998-2004 in the United Kingdom and between 2001-2005 in the United States. The series was based on characters created by Keith Chapman, and was animated by HOT Animation using physical stop-motion models. This show was the most popular out of all the later incarnations.

In the original series, Bob appears as a building contractor specializing in masonry in a stop motion animated program living in a small town called Bobsville with his colleague Wendy, various neighbors and friends such as Percy Pickles, Spud, Angelo Sabatini, J.J., Mr. Bentley and their crew of anthropomorphize work and consturction-vehicles which include: Scoop a digger, Muck a dumper, Dizzy a cement mixer, Roley a steam roller, and Lofty a crane. All episodes were produced by HiT Entertainment and all episodes aired on the BBC in the United Kingdom and also aired a US Dub version of the show which aired on PBS and Nick Jr.

Bob the Builder was nominated in the BAFTA "Preschool animation" category from 1999 to 2009, and won the "Children's Animation" category in 2003 for the special episode "A Christmas to Remember". Of the show's success, Sarah Ball said:

“I think diggers and dumpers fascinate kids in the same way that they are drawn to dinosaurs. They both have a timeless appeal. The technique of stop motion is very tangible - the characters look like you can just pick them up and play with them. It’s a safe, lovely, bright, colourful world, which is very appealing. Curtis Jobling did a fantastic job designing the show - it’s very simple and stylized but has such charm.”
―Interview with Sarah Ball, Gurgle.com

NOTE: For US dates see here

The original logo, seen on the pitch pilot.

The main cast of the Original Series, minus Travis, Farmer Pickles, and Scruffty

Poster for a production wrap party on Friday, February 26th, 1999 at World Service, Ashley Rd. Altrincham. (Note the intoxicated appearances of Bob and Farmer Pickles and the bottles, cigarette in Bob's mouth, and puke or urine on the ground)

Early versions of Bob and Scoop, then called "Digger" from the pitch pilot. 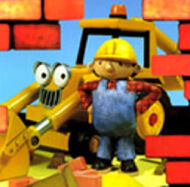 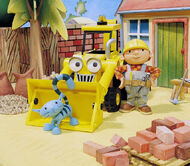 Third and official design by Curtis Jobling (circa 1998, 2011-present) 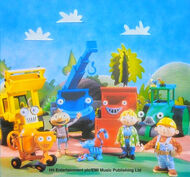 Promo of the main cast

Another promo of the main cast

Third promo of the main cast
Add a photo to this gallery
Retrieved from "https://btb.fandom.com/wiki/Bob_the_Builder_(Original_Series)?oldid=62644"
Community content is available under CC-BY-SA unless otherwise noted.