Welcome to Bob The Builder Wiki, the Bob the Builder encyclopedia.
We are currently editing over 1,225 articles, and 3,470 files.

Bob The Builder Wikia is a collection of information about Keith Chapman's hit British/American television series, Bob the Builder. Please check the rules before editing.

To write a new article, just enter the article title in the box below.

Not sure where to start? 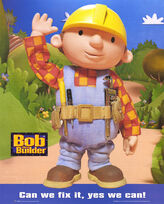 Bob the Builder is a British animated television show for children, created by Keith Chapman. In this show, Bob and his group help with renovations, construction, and repairs and with other projects as needed. The show emphasises conflict resolution, co-operation, socialisation and various learning skills. In the original series, stop motion animation was used but this was later changed by CGI animation starting with the spin-off series Ready, Steady, Build!.

Poll
Retrieved from "https://btb.fandom.com/wiki/Bob_The_Builder_Wiki?oldid=40952"
Community content is available under CC-BY-SA unless otherwise noted.